International Walk to School Day at West Park Elementary was a great success! Many children walked or biked to school, who normally do not do so. Many parents enjoyed that time with their children. It was a cold day, and one parent suggested that we should provide hot chocolate next time if it is cold again!

We had many wonderful  student volunteers, and they were so helpful and delightful for the kids! We really appreciate them! We also had great parent volunteers present.

The Cliff bars were a hit with the kids, and the children who had allergies were glad that there was an option without gluten or nuts in it. We gave out 118 Cliff bars and about 5 Fruit Snack bars. Since a large majority of our West Park students are bussed, we went with the International theme and provided a Passport card so that they could walk laps at the school and still feel like they walked extra that day! They were given rewards of stamps on their passport for each lap completed, and stickers when they filled their passports. 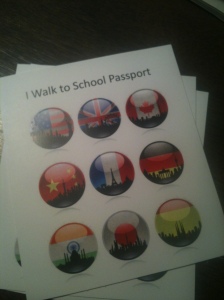 We had 4 walking school buses this year:

·         From Quail Run to Almon to rendezvous with another family, then to West Park

·         And last but not least, a walking school bus from Russell School to West Park!

Mr. Marineau took a photograph of the kids from the roof and performed the radio show from there! The children were very excited. Somehow the numbers were in the wrong order, though, so instead of 2012 it says 2021! Not sure how that happened, but it is still cute.

Thanks to Safe Routes To School, our wonderful student volunteers from Uof Idaho, the West Park School employees, the PAT members who helped, and the parent volunteers who walked their kids to school! They made this day a wonderful success!